By Badger Girl, September 17, 2010, In Healthy Cooking
Home » Healthy Cooking » Potato Leek Soup
Last night I got to try a new cooking toy- an immersion blender. My life has now changed for the better. Creamy soups without the dairy- Fall and Winter are going to usher in a new era at the Manatee household. Our first soup was potato and leek. Now looks can be deceiving. I was warming it up for lunch and just waiting for someone to comment on the aromas coming from the microwave or the beautiful soup I was stirring, and then I would say, nonchalently “Oh, this? I just whipped this up last night.” Then I looked at my soup, I mean really actually looked at my soup.
﻿ 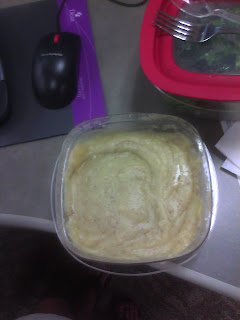 It looks like gravy.
But I can assure you, it tastes much better. 🙂
Potato and Leek Soup
2 lb of golden Yukon potatoes
2 medium sized leeks
1 Tbsp of Olive Oil
4 cups of vegetable broth
1. Cut the green ends off the leeks and discard.
2. Slice in half the long way. Then thinly slice.
3. You’ll need to wash the leeks between each layer. Easiest way to do this: fill your (clean) sink with cold water and put the sliced leeks in there.
4. Wash the potatoes (assuming you have a double sink 🙂 ). My original recipe said to peel them and I say forget it. Just thinly slice and set aside.
5. Take leeks out of sink.
6. Get a 4 quart saucepan hot and then add oil. Add leeks and cook for 2-3 minutes, stirring constantly so they don’t burn.
7. Add potatoes and broth. Turn it up really high so that it boils. Once it boils, turn down to medium low and cover. Simmer for 25 minutes.
8. Using an immersion blender, puree until smooth.
9. Add salt and pepper to taste (you’ll need it) and enjoy!
﻿