Land of the Misfit Herbs 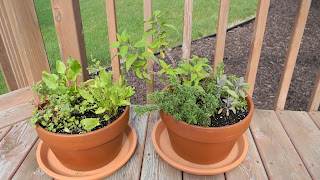 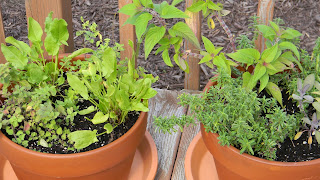 Way back in July, I got into my head that I just had to have a herb garden. I went down to the local garden store and explained I knew nothing about herbs or gardening but I knew I wanted an herb garden. I would have thought they would have been excited to share their knowledge but all I got was a pitying glance, “Well,” she said, “you know you are coming pretty late in the season. We really don’t have much. Are you sure you don’t want something else?” “No” I stood resolutely. “I want herbs.” She sighed and radio-ed out to someone in back and sent me on my way.

That woman also met me with a pitying sigh. “We’re pretty picked over. Are you sure you want an herb garden now?” I thought maybe it was like converting to Judaism where they turn you down three times before letting you convert.
“I really want an herb garden.”
“Positive?”
“Yes, I want an herb garden now.”
She sighed again, defeated.”If you insist, this is what we have” and she motioned over two rows of scraggly plants.
“We don’t really have anything good left but you may be able to find something you like.”
Their sales ability was truly astounding.
Because they had oregano, I didn’t think the select was THAT bad. Essentially I chose the herbs that did NOT attract bees and so I picked out oregano, sorrel, sage, pineapple sage and savory.

It is to my utter shock that in September these herbs are still alive and (gulp) thriving. Now I am trying to figure out what to do with them. I did some internet research and learned how to dry them so more to come on that. Thus far Manatee and I have eaten fresh oregano and sorrel. Sorrel is kind of a neat one- in the pictures, it’s the bigger green leaves and has a very lemon-y taste. We have mixed it with our salads and really like it.

So, any tips on what to do with fresh oregano, sage, pineapple sage and savory?

On a personal note, I am now officially Mrs. Manatee . 🙂 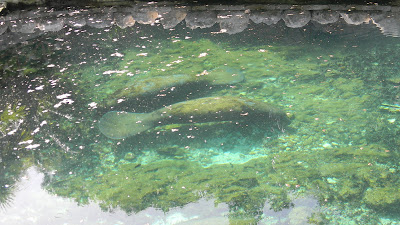 249 Comments on "Land of the Misfit Herbs"